Memories going back to school final days, I got an opportunity to visit chippagiri with my family. I dont know how to narrate my experience. I would still get goosebumps remembering that divine place. It is a lifetime experience. Chippagiri Nilaya salaho appa vijaya raaya

Significance of the name “Vijaya Raaya”

Every year, during Karthika Shudda Navami, Dashmi and UtwanDwadashi his ‘Aradhana’ is celebrated in Chippgiri, which is near Guntakal.

Sri Gopala Dasaru, his primary sishya, constructed a temple for Anjaneya in front of the ‘Katte’. There is a pond close by called ‘Vijaya Thirtha’. It is believed that during his third visit to Kashi, Sri Vijaya Dasaru brought Ganges and installed it in that pond, for the benefit of his disciples.

Sri.Vijayadasaru (1682 A.D-1755 A.D) is the Avatar of legendary Sage, Bhrugu Rishi. Among Haridasa lineage, He is highly revered and considered next only to Sri. Purandara Dasaru. 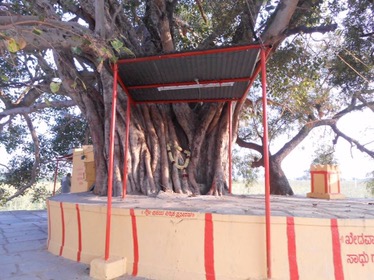 On his visit to Gaya, Vijaya dasaru had a dream and he received the ankita from purandara dasaru. On another dream, he had received Tamboori from purandaru dasaru. Next day morning for real, he found a tamboori in his place.

When Bhaganna was practicing Astrology in Adawani, that time Sri Vijayadasaru visited Bhaganna and said Bhaghanna what ever the business you did for all these years is enough, close your business and follow me. Bhaganna did not say anything and followed the master. Shri Vijayadasaru bestowed him as Shri GopalaVithala ankita and Bhaganna never thought that he will become famous as Gopala Dasaru one day. At that time he had Strong faith and belief in himself. Sri Gopaladasaru has written many Ughaboghagas, Devaranamagalu and Pada Suladigalu under the Gopalvittala Ankitha. He has written many krithis on his master Sri Vijayarayaru. One of the greatest achievements in the life of Sri Gopaladasaru was that, with the order from his beloved Guru Sri Vijayadasaru, he has donated 40 years of his life to Manavi Sri Shrinivasacharya who later popularly known as Shri Jagannatha Dasaru.

Sri Vijayadasaru was going for the regular darshan of Yantroddharaka Hanmuman during purandara dasara araadhane time and met the ill child(Child with sores) and his mother yagyamma. He accepted Yagyamma as His sister and bathed the child singing the devaranama Chiranjeevu yaagelo chinna neenu. All the diseases got disappeared and the child looked so beautiful then on. Vijayadasaru named him as mohana. Mohana dasaru is considered as the adoped son of Vijaya dasaru

Once Sri Vijayarayaru decided to go for the kaasi yatra and called seethaamma(Wife of Mohana dasaru)and said that some harm may befall Her husband and she should not get stuck but remember Him at that time. (Vijayarayaru was a great aparoksha gyaani and could foresee the future).suddenly Mohana dasaru died and he was taken to Yamapatna. His wife locked the door with the body as the crowd had gathered around to force cremation and she immediately prayed to Sri Vijayarayaru. The sage told Yamadharmaraaja that a mistake had occurred and a shepherd named Mohana was to be taken and yama said it will take a long time for the soul to reach the earth but dasaru said that the body will be preserved till that time. Mohana dasaru got up as from sleep and the shepherd died and with tears he washed the guru’s feet singing the song Tande Vijaya Raayaa

During Tirupathi brahmothsava, Vijaya dasaru took some time to reach chariot area. The chariot was not moving a bit. Vijaya dasaru arrived there and composed Saagi barayya and the next moment, Chariot started moving. check the song here: Sagi barayya bavarogada

Once Raghavendra Rao, a Tahsildar at Adoni was celebrating a wedding at his house and thousands of Brahmins flocked to his house for the wedding dinner. Dasappa was one among them. Contemptuously treated as the ‘Daasa, son of Koosu’. Dasappa ordered to prepare ‘Sandal paste’ for the thousands of Brahmins and none cared to know whether he had been served food. Poor Dasappa could not find place to sleep even that night. Such is the insolence of the rich towards the poor! Dasappa made his way to Chaagi (another village) nearby, Keshavaraya, the village officer invited him cordially and fed him sumptuously with Mrishtaanna. Dasappa blessed the host and continued his journey onward. He was Kashi bound. He reached Kashi, had his holy dip in the sacred Ganges and returned to his village in about 4 years. The parents brought a good bride ‘Aralamma’ and got Dasappa married to her. Dasappa spent 16 years married life and his parents being no more, he once again started off to Kashi. One night, Sri Hari having donned the attire of Puranadaradasa, appeared to him in his dream and showered His Bonediction on him, wrote Vijaya and disappeared proclaiming Dasappa as Vijayadasa. Dasappa had become ‘Vijayadasa’. His words became prophetic, people throned to him. Respect and regard began revolving around him. Contemptuous ‘Koosi’s son Dasa’ was now kingly in his status. Welcomes, Honours, Royal dinners, Royal treatments accrued and Vijayadasa was welcome every where. He finally reached Cheekalaparvi and worshipped Lord Ashvattha Narasimha, the presiding deity of his village. Aralamma’s joy knew no bounds. Her husband had returned to her

He clearly portrayed the poverty he faced in his earlier life and how his life has changed after becoming hari dasa with the song Ninna olumeyindha. This is one of the soul stirring compositions of Vijaya dasaru.

Destiny brought Vijayadasaru once again to village Chagi one day. The village officer Keshava Rao’s son had died that day. It was his marriage consummation day and all the kith and kin were aghast with this tagedy. Vijayadasaru gratefully remembered the host played by Keshavaraya when he was cordially treated years ago. He surrendered the Punya Phala of his pilgrimage to Kashi and brought back to life the young bridegroom, much to the happiness of all.

In those days, the route from Adoni (where both Vijaya Dasa and Gopala Dasa were staying) to Udupi was full of dacoits and robbers. Vilaya Dasa told Gopala Dasa that no harm would come to him if he continued chanting the Ugabhoga through his journey. Vijaya Dasa warned Gopaa Dasa to be careful about a dacoit gang which was led by a Vaishnava called Bheema in Mandegadde near Udupi.

Vijaya Dasa said only the Ugabhoga could save Gopala Dasa from the clutches of the dacoit.
Gopala Dasa then took upadesha and collected Mantrakshathe from the Vijaya Dasa and left for Udupi with several others.

Gopala Dasa managed to fend off dacoits or thieves en route to Udupi by reciting the Ugabhoga. The Ugabhoga also transformed Bheema into a pious man. Gopala Dasa then came to Udupi where he had the darshana of Sri Krishna. Check the link: Ugabogha: Abatthu parihara Ugabogha

Shri kalluru subbannacharya is the author of this work. Subbannacharya was a famous scholar, renowned for his discourses on nyaya sudha. He treated haridasas with disrespect, considering them as pretenders who mislead ordinary people.

Once subbannacharya was in a dilemma since the cook who was supposed to provide the dishes for the lunch arranged in honor of his sudha discourse absented himself with very little notice. However, shri vijayadasaru came there, disguised as a cook and ensured that the function did not stop. Later when people recognized vijayadasaru, he humbly requested subbannacharya to continue with his discourse. But subbannacharya, who was furious, refused to do so; he heaped insult after insult on the calm vijayadasaru, who heard him out patiently.

Finally, when things reached a head, vijayadasaru looked around and saw a water-carrier. On questioning, it was obvious that the carrier was unlettered and a total stranger to the shastras. Vijayadasaru put some akshate (colored rice used for devotional purposes) on his head, and holding him by hand, asked him to lecture on the nyaya sudha! Wonder of wonders, a scholarly discourse flowed from the lips of the water carrier! In addition to delivering a superb lecture, he even highlighted the portions that subbannacharya himself was not sure of, and clarified all the doubts that the latter had! As soon as vijayadasaru removed his hand, the water carrier relapsed to his true self. Subbannacharya was wonderstruck, and truly humbled by the experience.

The divine spark in him was awakened, and in a flash he recognized the greatness of vijayadasaru. He immediately fell at his feet, and with tears in his eyes, begged his forgiveness. He realized the foolishness of his ways, and requested vijayadasaru to accept him as his disciple. Vijayadasaru sent him to another disciple of his, panga nama dasaru, who in turn initiated subbannacharya into haridasahood and gave him the ankita of ‘vyasa viththala’. Check the link: Vijaya kavacha

Sri Srinivasacharyaru, son of Karnika Narasimhacharya,  had a profound knowledge of Madhwa Shastra.

Because of his great panditya in Sanskrit, he had least respect for Daasa parampare. Once Vijayadasaru had visited Srinivasacharyaru’s place. He had sent his shishya to invite Jagannatha Dasaru for Theerthaprasada. Srinivasachar agreed to come. After the pooja is over, Vijayadasaru, sent his disciple to call Srinivasaacharyaru for the bhojana, Srinivasacharya told that he suffering from Stomach pain, and could not come.

After this incident, immediately Srinivasacharya developed severe stomach pain, which could not be controlled by any medicine. He was restless, not getting sleep at all, not able to eat anything. Day by day, the pain grew and it was untollerable. He went to Tirupathi, Mantralaya, Ghatakachala, everywhere in vain. Rayaru came in his dream and asked him to meet Vijayadasaru only for remedy.

So, he came back to Vijayadasaru and sought his excuse for his ignoring Dasaru. Vijayadasaru immediately directed Gopaladasaru to give Ayurdana of 40 years. Gopaladasaru readily agreed and gave 40 years of his life to Srinivasacharyaru. Then Srinivasacharya got ankitha in Chandrabhaga river by Sri Purandaradasaru as “Jagannatha vittala”, and he went on to write Harikathamruthasara, and many many devotional songs, suladees, ugabogaas in Kannada and Sanskrit.