We can find the temple of Lord Venkateswara about one km from Manchalamma temple, near the house of Archaka (priest) of Moola Brindavana.

One piece of the stone was left behind at Madhavaram, at the spot where it had been located to show the significance of the location and the event.

This area came under Siddi Masud Khan of   Adoni. Venkanna was the Deewan of Adoni province and he was a devotee of Rayaru.

Rayaru told Venkanna that he wanted to enter Brindavana at Mantralaya as this was the place where he as Prahalada(Earlier birth)had done penance. Rayaru then sought permission from Goddess Manchalamma for constructing his brindavana.

The Goddess accepted. She appeared before Rayaru and claimed that this place would be so well-known that devotees would only flock to his temple and not other temple.

Rayaru then told the Goddess that he would bless devotes only if they visit her first and then had his darshan. Even today, this holds true and devotes are expected to see the Manchalamma first and then enter the abode of Rayaru. 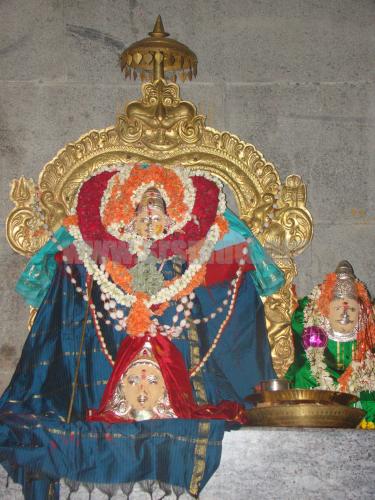 -The place Millions of people visit every year with the hope and belief on Kamadhenu Kalpavruksha Sri Rayaru. 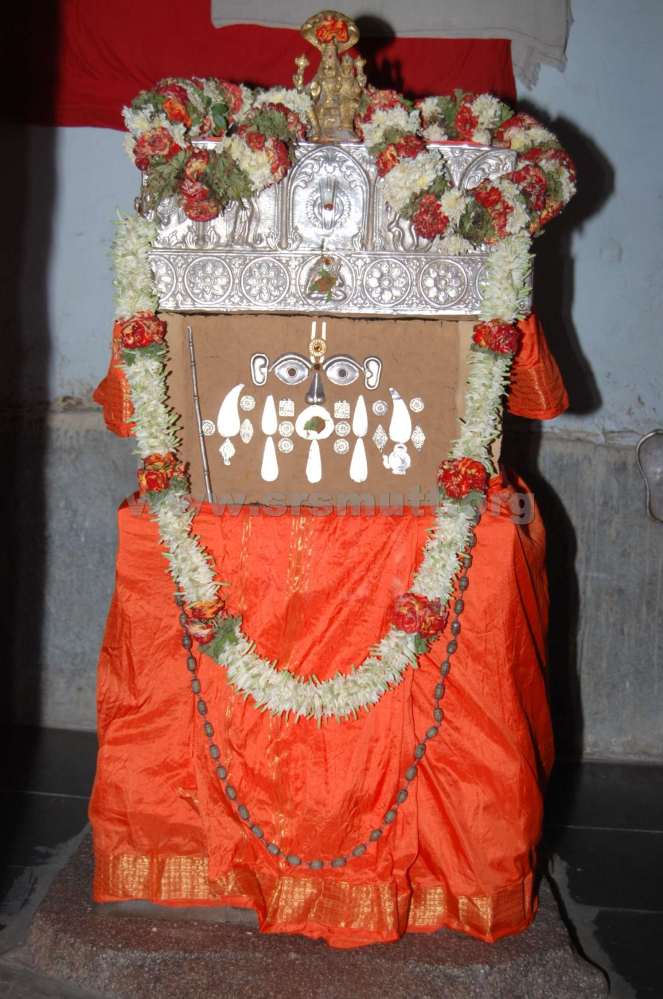 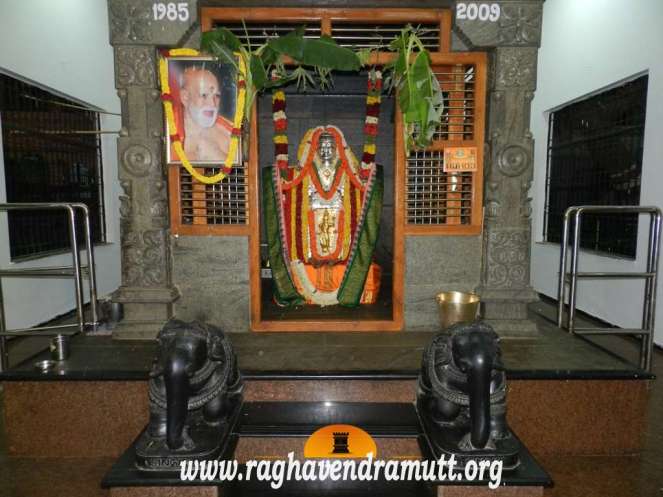 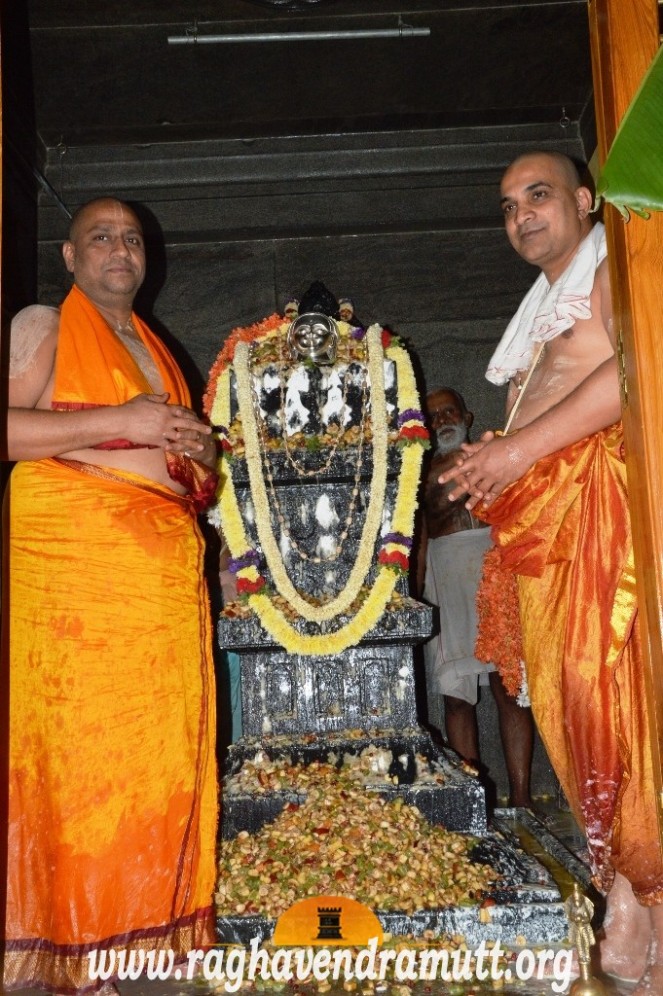 It is situated in the village Gandhal, Karnataka. It comes under Raichur district. It is just half an hour travel from Manthralaya. Lots of autos run from Manthralaya frequently.

The cave in which Sri Rayaru – as Guru Raghavendra – performed tapas for twelve years is on the top of a hillock.

After finishing his pooja of Rama at the cave temple, Guru Raghavendra used to sit for medidation. While on meditation at this cave he had carved the figures of Lord Venkateswara and Sri Lakshmi on the rock. The tapas continued for twelve years.

Mahiravana in the form of Vibeeshana took Lord Ram and Lakshman to his kingdom,pathala. When the real Vibishana came, every one understood that it was the handiwork of Mahiravana. The task of bringing back Sri Rama and Lakshmana was entrusted to Sri Hanuman.

Sri Hanuman entered pathala in search of Rama and Lakshmana. As per the advice of Sri Vibishana, Mahiravana could be killed only by blowing off the five lamps that are lit at his place of worship.

All the lamps were to be blown off simultaneously. Sri Hanuman prayed to Sri Rama and then on reckoning that if he had to blow all the five lamps at the same time he needs to have five mouths to blow from. He then assumed a form with five faces – pancha mukhi –  (Varaha facing north,  Narasimha facing south, Garuda in the west, Hayagriva facing sky and Hanuman in the east) and blew all the lamps simultaneously, and then killed Mahiravana.

This is the birth place of Jagannatha Dasaru. This is approximately 50 mins drive from Raichur. Bus facilities are available from Raichur to Manvi 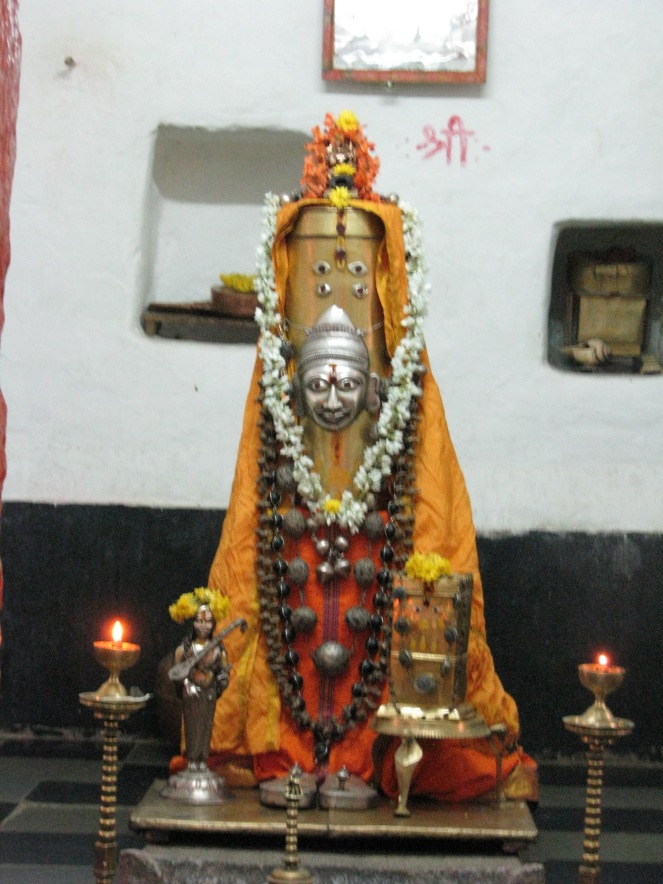 Because of the Poverty, Venkamma(mother of Bhaganna) with her childrens moved to Sankapura to work and earn in the new place. Because of their sincerity, Gudappa(Village accountant) did upanayana of Bhaganna along with his son. Bhaganna acquired siddhi by doing Gayathri Japa here.

On seeing the immense knowledge of Bhaganna, The king of Gadwal Rajaram gifted him fertile lands and a house in Uddanuru

Vyasa Tatvajna Theertha, also known as Aijee Swamigalu, then preferred to remain out of the Matha Parampare and Remained as Hari dasa and Bidi sanyasi

Venisomapura is in Andhra Pradesh and it is on the banks of the river Tungabhadra.

To reach Venisompura from Mantralaya, one has to cross the Tungabhadra and pass through Ieeja and Chinna Tandrapad in Mahaboobnagar district, adjoining Kurnool district.

This holy khetra is a village which is around 2.5 miles from Mantralayam

There is an idol of five Hanuman images which was worshipped by Pandavas. Madhu abhiskeka will be performed to this idol every year on the occassion of the Aradhane mahotsav of Sri Appavaru. 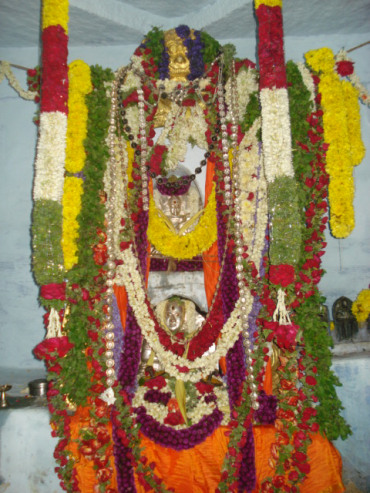 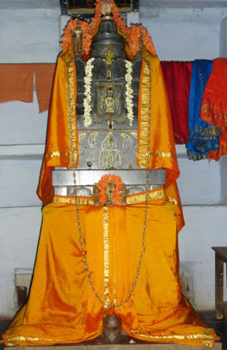 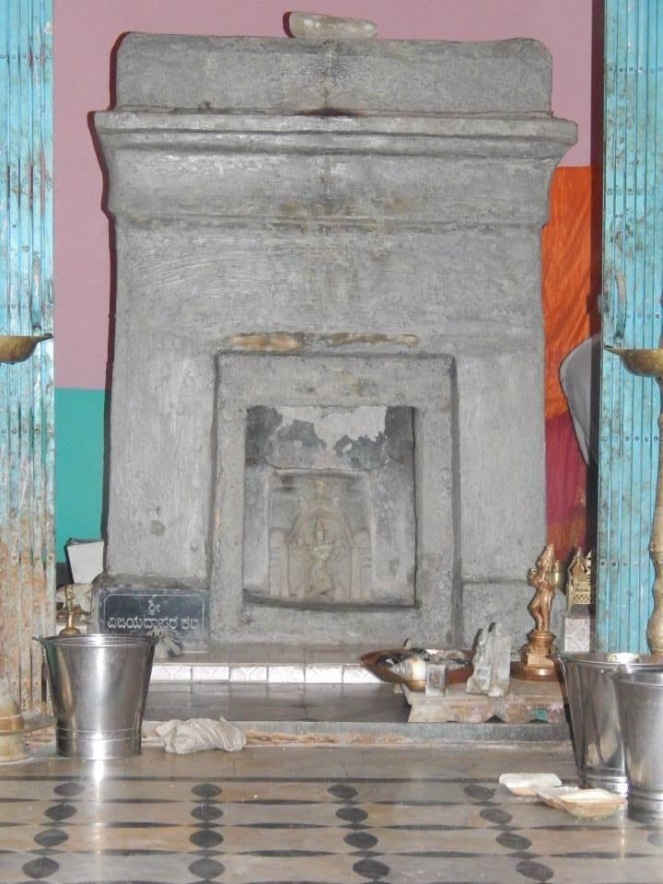 Three routes You can take to finish all the places 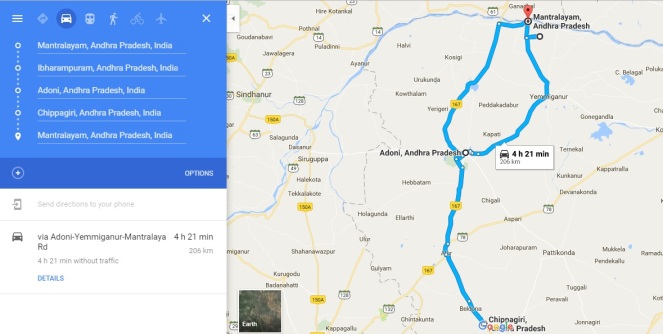