Every year when we do fasting on Vaikunta ekadashi, we obviously remember the Great yathi “Sri Raghuttama theertharu” as his aradhana falls on that day.

Raghuttama Theertharu  was the 14th pontiff of Uttaradhi Mutt during the period of 1537-1596 AD.

After repeated requests and invites made by the Zamindar family Sri Raghuvarya Teertaru accepted to receive bhiksha on a condition that their first son should be handed over to Matha. The  couple accepted to do so.

Accordingly Swamiji performed the puja of Sri Moola Rama and completed  the Bhiksha in their house and gave Pala mantrAkshate to the couple.

Later Srimati Gangabai conceived. Sri Swamiji was informed accordingly. He returned to the village expecting the birth of the child.

A big gold plate was sent to the Zamindar’s house from Matha with a direction to receive the child directly in the plate without touching the earth.

Accordingly the child was received in a gold plate and brought to the matha where the child was washed with Abhisheka water. Baby glowed like a moon

The boy was named after Sri Ramchandra by his Holiness and brought up at the matha itself and was fed only with Abhisheka milk of the Vyasa Kurma Saligrama.

When Sri Ramachandra became seven year old boy he had his upanayanam at the matha and the very next year he was given sanyasa and named as Sri Raghuttama Theertha.

Sri Raghuttama Teertaru obtained his advanced studies in Nyaya Sudha and Vedanta from the matha pandit, Sri Adya Varadacharya as per the direction of the guru Sri Raghuvarya Theertaru.

After some days the pandit puffed up with pride and discontinued coming to the matha for taking classes.

The next day early morning,  God himself appeared in his dream in the form of his Guru Sri Raghuvarya Theertaru and written the symbolical letters on the tongue of Sri Raghuttama Theertaru and blessed him that he would be a master of all knowledge and learning that he could commence teaching his disciples straight away.

The next day onwards at the usual time of lectures Sri Raghuttama Theertaru himself started to deliver impressive lectures on Nyaya sudha. That particular portion was not so clear even for the pandit Sri Varadacharya himself. On that day Pandit Varadacharya hide himself behind a wall and listened to swamiji’s excellent lecture which cleared all his doubts. He lay prostrated before Sri Raghuttama Theertaru and admitted his superiority in knowledge and paid respect to him.

Raghuttama Theertharu wrote five famous Bhavabodhas in Srirangam and He installed a Anjaneya at this place. The five bhava bodhas are as follows:

Sri Raghuttama Teertaru decided to enter the brindavana in manampoondi on the banks of the river south Pinakini(penna) which is in villupuram district of present day Tamil Nadu.

This is said to be the holy place where Galava rishi resided. This place is also called “pancha krishnaranya kshetra”

Sri Raghuttama theertaru entered brindavana in 1595 AD on the day of Vaikunta Ekadashi. 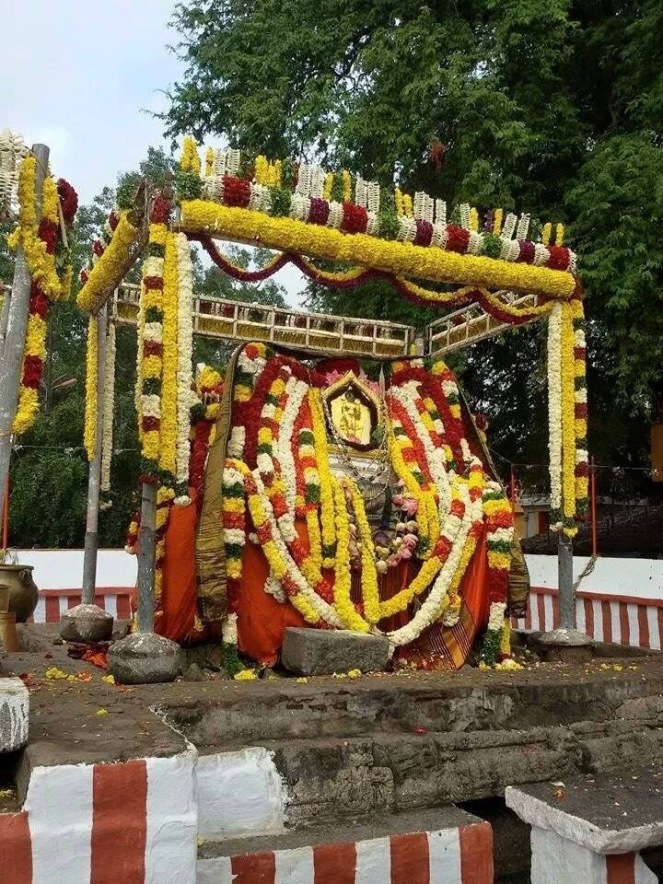 Trivikrama Temple: Those who visit Thirukovilur during Aradhana time, For vaikunta ekaadashi swarga dwara pravesha, people visit Trivikrama devasthana. It is near to Matha and can be reachable by Auto for a minimum fare

Veerachozhapuram: Veera Cholapuram is on the banks of river South Pennar. Famous for the brindavana of Sri Satyanatha teertharu, Veera chola puram is about 30kms from Tirukkovilur.